I’m here with Leslie McKee on her blog:

Takeover Thursday with Catherine Brakefield … and a GIVEAWAY! 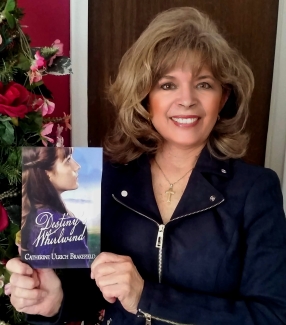 Catherine is here to share a bit about her series, as well as her latest release. She’s offered to give away a hard copy of the Destiny’s Whirlwind (US – winner’s choice of hard copy or ebook; International – ebook) . You can enter by using the Rafflecopter link at the end of the post. (Giveaway ends August 30, 2018. If you are the randomly chosen winner, I’ll contact you.)  Here’s Catherine…

Looking back, I can see the hand of God orchestrating the events leading up my writing career. My grandmother came to visit us often. She eventually moved in with my husband, children, and me and lived with us for twelve years. Then Gran left our home to live with Jesus.

My children and I would listen to Gran’s southern down-home dialect and my imagination would form the pictures she drew with her words. I visualized the gypsies perched upon their tall wagon seats, driving their horses down the dusty road in front of Gran’s home. Heard the taffeta gowns rustle in the night breezes, the gigot sleeves adorning the slender shoulders of the ladies that depicted the Gibson Era.

Gran inspired the Destiny series and encouraged my dream. My purpose in writing is to spread the truth about our Christian-American heritage.

The word of God is the sword of the spirit. As our former Christian-Judeo Americans learned, I want my readers armed and equipped to persevere throughout this cyber age. I sprinkle Bible verses through my stories sort of like what you do when you salt your food. I find it adds just the right flavor! “So shall My word be that goes forth from My mouth; it shall not return to Me void, But it shall accomplish what I please, And it shall prosper in the thing for which I sent it.” (Isaiah 55:11 NKJV)

My four-book series can each be read as a standalone. The series begins in 1857, during the Antebellum Era. I do extensive research. My readers attain historical knowledge not acquired within with the walls of higher learning! This series transports readers through the Civil War, Gibson Era, Spanish-American War, World War I, Great Depression, the Big Band Era, and climaxes through World War II.

This epic did not arrive without conflict. I often prayed, arguing with God! I wanted my characters to be the perfect individuals I wanted in myself, my husband, and my children. God let me know—that was not His plan.

For instance Ben McConnell in Swept into Destiny is a proud Irish immigrant who is determined not to give up in spite of hunger and deprivation that haunts his steps. He has a distaste for the English and rich landowners of Ireland and America. However, because of his unshakeable faith in Jesus, his feet are firmly planted on the narrow road. Because of the three mustard seeds his father brought from Ireland, he claims Matthew 17:20  “…if you have faith as a grain of mustard seed…nothing will be impossible.” Maggie Gatlan is both English and a rich Southern belle. She’s a rebel disguised in frilly clothes and prefers riding astride rather than side saddle. She refuses to allow her countrymen to dictate to her conscience. Ben’s and Maggie’s journeys delve deeply into the truth about faith and devotion. 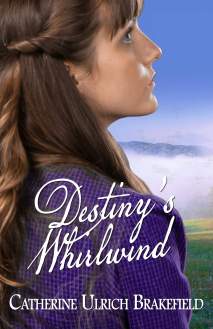 In Destiny’s Whirlwind, Collina McConnell doesn’t understand her father’s passion toward their estate.  Ben McConnell wasn’t materialistic. Just what was the mystery behind his legacy for Shushan?  The parable of the sower in Luke 8:5 takes on new meaning when Collina’s life choices become as interchangeable as the rocky and thorny soil beneath her shoes. All she has to hold onto is her father’s mustard seed of faith. She realizes that Rough Rider Franklin Long was placed in her life at such a time as this. War is declared and he leaves. Will he return from the wave-tossed shores of Cuba to resolve his battles? Or remain in the dark reaches of his past?

In Destiny of Heart, Ruby McConnell leaves her kindred for the prairies of Colorado with her devoted husband and her seven-month-old child. She is nicknamed by friends and foes alike as “a holy roller.” She clings to the Word of God for strength and hope.  Confusion and uncertainty hover around her like the dust storms, rattlesnakes, and droughts, consuming her energy and weakening her resolve. The Great War and the Great Depression change not only the nation’s borders, but hers… Was her husband right about Buck Briggs; is he God’s choice and their last hope?

Yes, my characters are flawed, some more than others. I obeyed God and by writing of my characters’ failures, I witnessed—the love of an unfailing God!

Swept into Destiny Book 1: “One Brave Decision Leads to Serious Consequences.” The story begins in Tennessee, during the Antebellum Era. Despite the repercussions of a hangman’s noose, Maggie Gatlan secretly educates the slaves at Spirit Wind Manor. She meets Ben McConnell, an Irish immigrant who was hired to dredge out their snake-infested swampland. Civil War erupts, Maggie must choose. Conscience and consequence—did she care more for Ben or for her beloved South?

Destiny’s Whirlwind, Book 2; “If Ye Have Faith… Empowers a Young Woman’s Heart.” Bound by her word, Collina McConnell must uphold the Shushan legacy of their Kentucky estate. Rough Rider Franklin Long offers his help. War is declared and he leaves for Cuba. A disgruntled in-law and a vindictive lawyer place the family into life’s tangled web of deception and greed. Collina fights to keep her promise to her father. Esther 8:6 holds new insight for her; “How can I endure to see the evil that shall come unto my people?”

Here is a link to a special bonus chapter which ties Swept into Destiny and Destiny’s Whirlwind together!

Destiny of Heart Book 3: (releases October 30) In 1917, America enters the Great War with spirits high. Then unforeseeable circumstances plunge the country and the McConnell’s into a battle for survival: Collina is desperate to save her marriage and fulfill her promise to her father. Ruby prays for courage and wisdom in deciding the course of her life in a heart-wrenching decision of love… Will the McConnell’s persevere through the tattered fields of their life choices and remain true to Shushan’s legacy?

I will give away one hard copy of Destiny’s Whirlwind or e-book in US/e-book only for international.

As Collina rode to the cornfield, the sunset radiated the western sky with pale pinks, golden yellows, and gentle pearls through a sheer veil of white, like a bride before her groom. The cornfield, stripped of its green foliage and fruit, stretched out as dejected as she felt. The only thing live here was the occasional squirrel hustling acorns. She turned to leave. A neigh from her horse told her she was not alone. Where was he? From out of the shadowed trees rode Franklin.

Snatching a deep breath, she hoped to steady the rapid beating of her heart. “It was you, wasn’t it, who bought Proud Lady?”

The saucy smell of horseflesh and wet bark assaulted her nose. She squinted for a better look at him. The mists rose from the damp earth and mingled with their sultry breaths. He laid his arm across his saddle horn and watched her like a wary warrior might.

Catherine is an award-winning author of faith-based historical romance Wilted Dandelions. Her new Destiny series begins with Swept into Destiny. The second of her four-book Destiny series Destiny’s Whirlwind released this past spring. Destiny of Heart will release October 30.

She enjoys swimming and horseback riding. She lives in Addison Township, Michigan, with her husband and their Arabian horses. Her children, grown and married, she and Edward are the blessed recipients of two handsome grandsons and two beautiful granddaughters!

17 comments:  Please check out Leslie L. McKee – Edits and Reviews by Leslie at: